The beauty and majesty of the cross and what Jesus Christ did for all of humanity is an amazingly beautiful picture and you’ll often times hear many preachers and pastors talk about it and it’s wonderful, but here’s what is so often missed…

First, if Jesus didn’t die on the cross for our sins, He would have done it another way.

Secondly, nothing can stop God’s plan.

Now that you know the answers 😉 let’s unpack these a little more!

I’ve heard it said by pastors, “What IF Jesus didn’t die on the cross for us? What IF He never did this for us. Without that one act that He did for all of humanity, we wouldn’t have what we have.”

Listen, I get it.

It’s very clearly that if He didn’t die for our sins, we would have to stand before our holy and fair judge, God, and we would not make it. He took on the penalty that was ours and overcame it.

But to say that we wouldn’t have what we have if He didn’t die on the cross is NOT true.

Don’t you see how the message they are saying, while innocent on their lips and with no ill-intention on their part, can be degrading to our Lord and Savior?!

He had a system. The people brought their sacrifices. He gave them the Ark of the Covenant. Through the generations, they had systems in place.

If Jesus never died on the cross, in our day, we’d still be sacrificing animals.

If Jesus never died on the cross, He would have done it another way.

It’s not the cross that makes the story, it’s God.

We have to stop thinking about things in humanistic terms.

“I’m so glad for what Jesus did for me on the cross.”

That’s great. But we forget that He sacrifices in the same way for us every single day of our lives?

Let’s see what the Bible has to say.

“Jesus Christ is the same yesterday and today and forever.” Hebrews 13:8

The Bible, God’s Word, says He doesn’t change. If He died on the cross for us 2,000 years ago, if He sacrificed for us back then, you better BELIEVE He’s sacrificing for you today. And yesterday. And tomorrow!

Every DAY He’s sacrificing for us. 😮💣💯

He didn’t stop loving us or go to Heaven and cease to stop being HIMSELF!

No, He sacrifices for us every day. And He deserves honor and praise for that EVERY SINGLE DAY! Not JUST on Easter.

Yes, if Jesus didn’t die on the cross, He would have done it another way.

If He didn’t do it that way, He would have done it another way. Why? Because God is sovereign.

HE, and He alone, decided He wanted it to be as a way to die on the cross.

No one else chose. And no one else MADE Him do it.

We could still be sacrificing animals. Sacrificial systems were set up and in place. He CHOSE to die on the cross for us. He chose that.

No one told Him to do it (Isaiah 43:10 says there is no other god before Him, nor will there ever be after after). No one made Him do it. He wanted to, because of His great love for us!

No one can stop His will.

If God wants something to happen, you cannot stop it.

Job 42:2 says “I know that you can do all things, and that no purpose of yours can be thwarted.”

There is nothing greater than God and nothing that can stop Him.

Aren’t WE lucky that God is good?! That He’s not a tyrant, power-hungry god.

Aren’t WE lucky that He’s generous and good and fair…and LOVING?!

Because we can’t stop Him. Instead of being a slave to an unfair, unjust god, we have a holy God we can go to anytime we want. He’s there, He’s close to us, He listens.

You have Herod trying to kill Him as an infant He had to get through.

You have Him walking invisibly through the crowds when they tried to attack Jesus, the Bible stating because “it wasn’t His time”.

You have Him telling Judas to do what he would do (His giving PERMISSION to Satan to do it).

You have Satan playing into God’s hands by being the vehicle in which Jesus WAS crucified and “caught”.

You have Jesus, the man, not fighting His temptation to NOT die when He was praying in Gethsemane; willingly submitting to the Father’s will.

All throughout the entire story of Jesus dying on the cross, you see a perfect picture of God and His sovereign will, which I think that so many people miss.

Yes, we should all praise what He did for us, He died on the cross for us and it’s amazing and great. I’m so utterly thankful I don’t have to go and sacrifice an animal to cover my sins!

But there’s so much MORE to the story you’re missing!

THAT’S the power of the Living God.

👉 You do not serve a tiny God who lives up in space somewhere that doesn’t care about you.

He’s here with you. He chose what you would do in your life from eternity past. His will for your life was set in stone far before “stone” was even a word! 😮

Do you understand how BIG He is? 🙏

Do you understand how much POWER He has? 🤯

Do you understand how much He LOVES you? 🎁

He chose what you will do. He chose you to be born. He chose your life. Nothing can stop what He wants to happen, but He does allow us CHOICES.

See, Jesus had a choice.

Jesus could have said no. He is God, after all.

We have that same choice every day as well.

God has a plan for us all so intense and so beautiful that you would not believe Him if He told you. 💯

Sarah laughed when God said she’d have a baby. I laughed at Him when He said I would be like Moses and lead a lot of people. We tend to not take Him seriously. We tend to not believe those outrageous things. But in fact, they are true!

God has such an incredible plan for your life. He chose it before the earth began and there’s nothing that could stop it but He allows us to choose.

He did not create an army of robots, He created humans. He gives us that free will, decisions, and choices. He WANTS us to CHOOSE Him.

He gives us opportunities to choose His will every day.

If there is an idol in your life, something you’re picking over God, and you’re not repentant, eventually He WILL take it away. God is a jealous God (Nahum 1:2, Exodus 20:3,

Listen…God is sovereign. God chose for us what He wills for our lives from eternity past. God creates it all to happen. He orchestrates the entire thing. Yet…YET, He wants us to want His will. And when we don’t, when we sin, when we follow our OWN devices, sometimes He lets us go down those paths to teach us a lesson. He lets us fail sometimes and that’s OUR fault, not His.

We lose a lot of time that we could be useful to Him in service, we torture ourselves because we go down the wrong road, all because we are not willing, as a people, to keep our eyes focused and fixed on Him (Matthew 23:37).

Jesus fixed His eyes on God. Who’s attention was His on as He died? He was talking to God, not to humans (Matthew 27:46). His focus was on God through out His entire life and ministry.

👉 How many things, how many blessings in your life have you lost because you went down the wrong road willingly? Because you lost your focus on God?

When we keep our focus on Him and Him alone, when we walk in the Spirit and do not let the temptations of the world pull us under, God has amazingly BIG things stored up for us to have.

Maybe it’s a ministry, maybe it’s being used by Him, maybe it’s showing the world He exists through you, but whatever it is for you specifically, it’s BIG.

Because we serve a BIG God. 💣

Bible Verse That Starts with A – Z 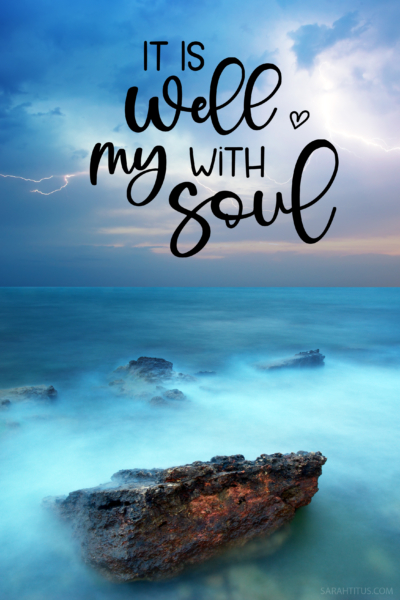 Why Taking Time To Rest Is So Important For Moms 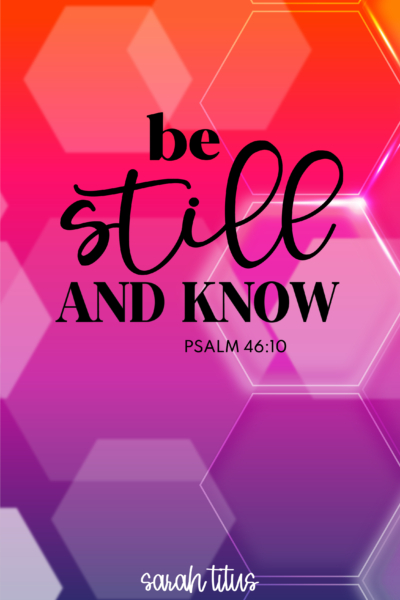